When you book with an account, you will be able to track your payment status, track the confirmation and you can also rate the tour after you finished the tour.
Sign Up
840

This 14 days’ tour covers the most well-known places of China, including Shanghai, Hangzhou, Yangshuo, Yangtze River, Xi’an and Beijing.

Nihao! Welcome to Shanghai. Shanghai is one of the four direct-controlled municipalities of China and the most populous city proper in the world, with a population of more than 24 million. It is a global financial center and transport hub, with the world’s busiest container port. Located in the Yangtze River Delta, it sits on the south edge of the estuary of the Yangtze in the middle portion of the East China coast. Upon arrival at the airport, own transfer to your hotel located in the city center. You will have a 6 pm group meeting at your hotel, and there will be more information about the meeting when you arrive at the hotel. Please look for a note in the hotel lobby or ask at reception. Your group meeting will include details about your trip, followed by an orientation walk and included dinner at a local restaurant.

Today we will visit the City God’s Temple, a folk temple neighboring Yuyuan Garden. The City God Temple in Shanghai originated as the Jinshan God Temple, dedicated to the spirit of Jinshan, or “Gold Mountain,” an island off the coast of Shanghai. It was converted into a City God Temple in 1403, during the Yongle era of the Ming dynasty. Its popularity turns the surrounding area into a large pedestrian area that hosts an array of shops, restaurants, teahouses, as well as annual temple fair events. Yuyuan Garden, also called Yu Garden, was originally built in 1559, opened to the public in 1961 and a declared monument in 1982. It is the most extensive ancient garden with Ming and Qing architectural styles. After spending some time in the temple area, you will explore – Shanghai French Concession, a concession area from 1849 till 1943. In almost one century, it develops its distinct character with culture mixture of Chinese and European, also one of the Catholic centers in China. In the evening, we will board on the express train to Hangzhou, then private bus transfer to the hotel.

Hangzhou is the capital city of Zhejiang province located in east China and the southern terminus of the Grand Canal. Today we will explore West Lake. It is a freshwater lake in Hangzhou, China. It divided into five sections by three causeways. There are numerous temples, pagodas, gardens, and artificial islands within the lake. West Lake has influenced poets and painters throughout Chinese history for its natural beauty and historical relics. It was made a UNESCO World Heritage Site in 2011. Longjing Tea or dragon well tea of more than 1200 years old is the No. 1 tea in China and regarded as the “Green Queen.” Today we will visit Longjing Tea plantations in Hangzhou to appreciate the beautiful verdant sightseeing and know more about the culture of tea and Chinese nation. At night private bus to the airport, then fly to Guilin. Upon arrival, private bus to Yangshuo (approx. 1.5hrs).

Yangshuo, a county and resort town in southern China’s Guangxi region, is known for its dramatic karst mountain landscape and outdoor recreation. Today we will head out of town on bikes to cycle through the surrounding countryside, and gain an insight into Chinese rural life on a ride where each turn in the road brings you to another picture-postcard location.

Free day to explore Yangshuo. You can start your morning by joining a Tai Chi class with a local Master. After that, you might want to take a cooking class, visit a local farmers’ market, where you can get a feel for the regional produce and daily life. Yangshuo is also famous for rock climbing and caving. Your expert tour leader will help you to organize any activities you might want to try.

Included activities:
· There is no activity included today

After breakfast, private bus transfer to Guilin airport, board a flight to Chongqing. Upon arrival, private bus to the pier, then we will board the cruise on the Yangtze River – your home for the next three nights. Cruise down one of the world’s greatest rivers, with two full days on board a tourist class cruise down the river to Yichang. The Yangzi has inspired numerous poets, writers, and travelers over the centuries. You will travel along one of the most picturesque sections, through the renowned Three Gorges.

Early in the morning, stretch your body from a Tai Chi class and get prepared for another day full of energy and excitement. After breakfast, take an excursion to Fengdu Ghost City. It is a large complex of shrines, temples, and monasteries dedicated to the afterlife located on the Ming mountain in Fengdu County. The Ghost City focuses on afterlife and combines of Confucianism, Taoism, and Buddhism. After lunch, visit Shibaozhai, a rocky and craggy hill about 200 meters high with really steep sides and a red pavilion on the riverside. The red pavilion with nine floors, standing on top of the hill, is one of the largest wooden temples in China. In the evening, enjoy a dynasties culture show by Chinese minorities.

Today the cruise will sail through the Qutang Gorge and the Wu Gorge, two of the Three Gorges on Yangtze River, which are well-known for their scenery classified the highest level by Chinese National Tourism Administration. Take an excursion to the Shennv valley (the Goddess Stream) where you will have a breathtaking view of thousands of cliffs hanging in the sky; hundreds of meters blue peaks and a slight line opened among groups of rocks blocking the sky. You will understand why it is named this. In the evening, enjoy the captain’s farewell banquet.

Early in the morning, arrive at Huang Ling Miao and then visit the Three Gorges Dam, the most significant hydro-electric project in the world completed in 2009. The Three Gorges Project brings benefits in all aspects of flood control, power generation, tourism, ecological protection, South-North water transfer -and irrigation. It also had a world record in 2014 for an enormous amount of power generated. Our Yangtze river journey will end at Yichang Pier where we will be picked up and transferred to Yichang train station for an overnight soft-sleeper(first class) train to Xi’an.

Upon arrival, private bus from train station to our downtown hotel. Enjoy a breakfast of unique local food, then start exploring the city by visiting the ancient City Wall, the most significant and best-preserved wall extant in China now, running over 13 kilometers around Xian. Later, take a short walking tour of the city, passing by the Bell & Drum Tower, Muslim quarter and lively markets.

Today we will visit the Terracotta Warriors by private bus. You’ll learn all about this incredible archaeological find, discovered in 1976 by farmers digging a well, after being buried for 2,000 years. Three main pits are open for you to view, where just under 2,000 of the total 6,000 warriors – each individually sculpted from clay, each having a different costume, height, and even facial expressions – stand in battle formation. The scale is incredibly impressive. After the tour, we will enjoy a lunch in a local village, then drive back to train station for an overnight sleeper train to Beijing.

Arrive Beijing early in the morning. After breakfast, we will take the metro to Tiananmen Square, one of the world’s largest public squares, home to the Monument of the People’s Heroes and the Great hall of the People. Then enter the Forbidden City, built from 1406 to 1420, a ceremonial and political center of the Chinese government for more than 500 years. It was declared a World Heritage Site in 1987 and is listed by UNESCO as the most extensive collection of preserved ancient wooden structures in the world. After the Forbidden City, we will stroll in the alleys formed by lines of traditional courtyards known by Hutong and experience the local lifestyle of Old Beijing.

This morning we’ll take a private bus to visit Great Wall – Mutianyu Section (approx. 2hrs drive), one of the best-preserved parts of the Great Wall with 22 towers winding along the mountain ridges. Spend quality time exploring and learning the history of Great Wall of China as well as enjoy the view at Huairou county the suburban area of Beijing. The great idea is to bring a picnic lunch with you to enjoy at the top the wall during a rest break. We will be back to Beijing downtown area in the late afternoon.

There are no activities planned for the final day, and you can depart the accommodation at any time. There’s so much to see and do in Beijing; you might want to visit Summer Palace, Lama Temple and the Temple of Heaven.You will have a group transfer to the airport. 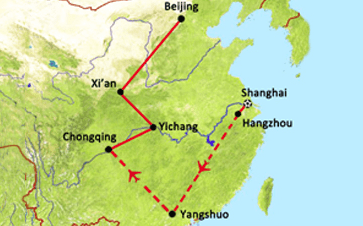 This was a fantastic tour that was made even better than we expected by us being lucky enough to have a brilliant tour leader. Leah really looked after us and went above the call of duty by helping me to meet up in Xi’an with a friend! The itinerary was genearally great, and covered all the key sights of China.

Itinerary was brilliant, really covered everything inChinawe wanted to see, without ever feeling too rushed. All activities included were good, but the variety of optional activities was really welcome too. Definitely packed the most we could into 2 weeks! We hoped for a holiday of a lifetime and this certainly lived up to it! The tour, group and leader were all brilliant. I was talking to one of my colleagues at work about our holiday, and she has just booked a China/Japan trip departing later this year.

Trip truly covered the highlights, and it was a great experience for me, especially since I have done little international travel.

The tour was well organized, the time well distributed and the activities included interesting. The itinerary was very well planned, all the included activities were very interesting and the group leader was adapting the schedule to the group as well. The guide Stony did an outstanding job. He was very helpful and made the experience much more easier for us. He always had the answer to our questions and provided a lot of interesting information aboutChina.

A fantastic experience of a lifetime. There was so much to see and do and John made it all work perfectly. The places we visited were wide ranging and very different. It was good to experience the food, culture and ‘flavour’ of the different cities. The museum at Shanghai was a great intro toChinareally good new part was Yangshuo-really enjoyed the cultural insight. The cycle tour and cookery lesson were highlights of Yangshuo .

We were ‘fogged ‘ in on the Yangtze which was diaappointing and could not be helped- but John taught us to play Mah Jong- which was superb- above and beyond anything we expected. All the evening meals were well planned-nice and close to wherevere we were, cheap and fresh with great service.