When you book with an account, you will be able to track your payment status, track the confirmation and you can also rate the tour after you finished the tour.
Sign Up
643

Nihao! Welcome to Beijing, the Capital of China.Your tour begins with a welcome meeting at 6 pm. and there will be more information about the meeting when you arrive at the hotel. Please look for a note in the hotel lobby or ask at reception. Your group meeting will include details about your trip, followed by an orientation walk and optional dinner at a local restaurant.

Today we’ ll explore famous sights in Beijing. There will be a lot of walking today as well as using public the subway to get around.After breakfast, we will take the metro to Tiananmen Square, one of the world’s largest public squares, home to the Monument of the People’s Heroes and the Great hall of the People. Then enter the Forbidden City, built from 1406 to 1420, a ceremonial and political center of the Chinese government for more than 500 years. It was declared a World Heritage Site in 1987 and is listed by UNESCO as the most extensive collection of preserved ancient wooden structures in the world. After the Forbidden City, we will stroll in the alleys formed by lines of traditional courtyards known by Hutong and experience the local lifestyle of Old Beijing.

This morning we’ll take a private bus to visit Great Wall – Mutianyu Section (approx. 2hrs), one of the best-preserved parts of the Great Wall with 22 towers winding along the mountain ridges. Spend quality time exploring and learning the history of Great Wall of China as well as enjoy the view at Huairou county the suburban area of Beijing.
The great idea is to bring a picnic lunch with you to enjoy at the top the wall during a rest break. We will back to Beijing in the late afternoon.

The highlights of the tour today is to visit the Summer Palace, the largest imperial garden, and palace in China. There are landscaped gardens, pavilions, lakes, temples, and bridges. You will stop at the Hall of Benevolence and Longevity, the Hall of Happiness and Longevity, Kunming Lake, and the Qingyan Stone Boat. After this tour, private transfer to Beijing train station for overnight train to Shanghai.

Today we will visit the City God’s Temple area, a folk temple neighboring Yuyuan Garden. The City God Temple in Shanghai originated as the Jinshan God Temple, dedicated to the spirit of Jinshan, or “Gold Mountain,” an island off the coast of Shanghai. It was converted into a City God Temple in 1403, during the Yongle era of the Ming dynasty. Its popularity turns the surrounding area into a large pedestrian area that hosts an array of shops, restaurants, teahouses, as well as annual temple fair events. Yuyuan Garden, also called Yu Garden, was originally built in 1559, opened to the public in 1961 and a declared monument in 1982. It is the most extensive ancient garden with Ming and Qing architectural styles.

In the morning, we will take a private bus to airport and board on a flight to Zhangjiajie.Zhangjiajie, located on the northwestern border of Hunan, draws the attention of visitors to the Phoenix Ancient Town and Wulingyuan Scenic Area. Rising from the subtropical and temperate forests of northwest Húnán, Zhāngjiājiè (张家界) has a concentration of quartzite-sandstone formations found nowhere else in the world. Some 243 peaks and more than 3000 karst pinnacles and spires dominate the scenery in this Unesco-protected park.Upon arrival, we will take a orientation walk with tour leader to explore this amazing town.

Travel by public bus to Zhangjiajie National Forest Park. This scenic area is world famous as the mountains here inspired the floating mountains in the Hollywood movie Avatar. The peaks in Yuanjiajie are nearly at the same height, making it into a mountain platform, great for enjoying the panorama view of the amazing scenery. Then, take a sightseeing bus to Tianzi Mountain, from where enjoy an incredible view of the peaks rising one after another. Atop of the mountain offers a full extent of the whole scenic area, which is magnificent and spectacular. There are four wonders in Tianzi Mountain: the Sea of Clouds, the Radiance of the Moonlight, Rays of Sunshine and the Snow in winter.

Continue your adventure at the National Forest Park. Explore the park by visiting the Golden Whip Stream, which brings you into the Pandora’s wonderland of the movie Avatar. The pristine water, the verdant peaks, the cliffs and the serene valley make the stream an extraordinarily beautiful, tranquil and natural ecological environment.

Today we will take a public bus to Fenghuang Ancient Town (approx. 4 hrs). Then visit the Diaojiao Lou (traditional Chinese gabled wooden houses built on stilts) on both sides of the river and near Hongqiao. Hongqiao (Rainbow Bridge), built in the Ming Dynasty over 600 years ago, is the ancient town’s best well-known tourist spot.

This morning we will take a public bus to Longsheng( approx 4.5 hrs.) Upon arrival, private transfer to Longji. The Longji region has some of the most extensive rice terraces around. These terraces change with the seasons: filled with water from the mountains before planting, becoming green during the growing season and then golden when the rice is ready for harvest. We will take a short hike upon arrival. This evening you’ll overnight in the village of Dazhai, which is home to the Yao minorities.

Today you’ll hike through the Longji Valley and its rice terraces, constructed over 500 years ago Walk through stunning scenery, with its unique terraces for growing rice, alongside bamboo trees and chestnut forests. Despite some challenging hills, much of the hike is spent walking around over the stones, passing waterfalls and fields. After a day spent admiring the endless vistas, you’ll overnight in the Pin’an village – Zhuang minority village.

Get up early to enjoy the sunrise on the terrace rice field. Then private transfer to Yangshuo (approx. 3 hrs), Yangshuo, a county and resort town in southern China’s Guangxi region, is known for its dramatic karst mountain landscape and outdoor recreation. This little town is popular with the Chinese and Western travelers alike, who come for the beautiful landscape and stay for the great cafes and bars. It’s also one of the best places in the country to get a feel for local culture and traditions while having plenty of fun at the same time.

The countryside around Yangshuo immortalized in many traditional Chinese paintings – picture immense limestone karsts dotting the rural landscape, towering spectacularly over rice paddies and the meandering Li River. Today we will head out of town on bikes to cycle through the surrounding countryside, and gain an insight into Chinese rural life on a ride where each turn in the road brings you to another picture-postcard location.

Today’s another free day to pursue your interests here in Yangshuo. Freedom and flexibility is the idea today, and your friendly local leader will be on hand to give you suggestions and tips.You may start your day by taking a Tai Chi class or Kung Fu lesson or take a short hike up to Moon Hill. Even take a cooking class. There are a lot of things to do in this little town.

After breakfast, transfer to Yangshuo train station for the bullet train to Shenzhen. Upon arrival, we will cross the Shenzhen-Hong Kong border. The China-Hong Kong border is busy, so there can often be a bit of a wait to get through, and a lot of patience is required. Then take KCR train to central Hong Kong. You will have a few hours to explore Hong Kong before our final tour to Temple street night market.

There are no activities planned for today, and you can depart the accommodation at any time. 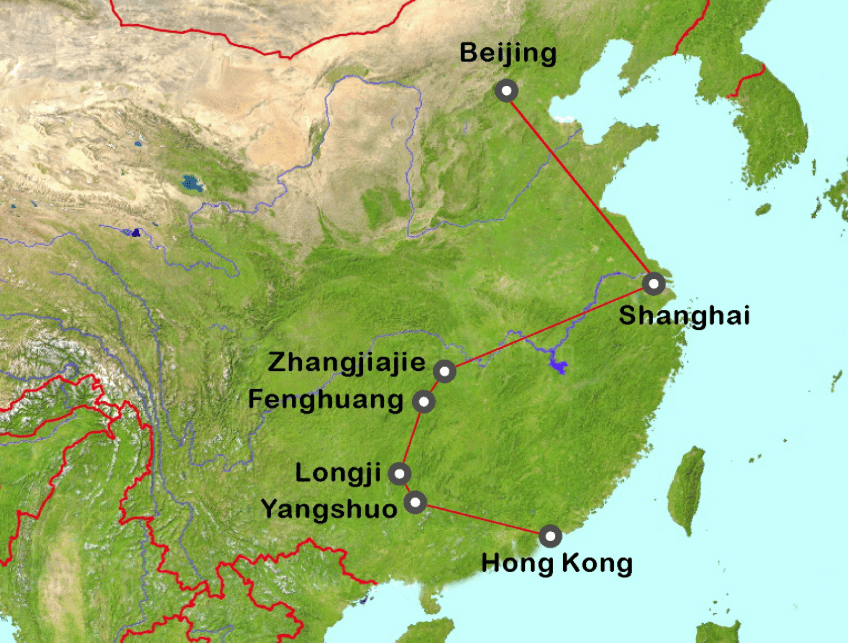 I had a fantastic experience! It was my first time in a country where I don’t speak the language and, with the help of our guide, I never found it to be a problem. The itinerary was perfectly clearly and followed closely with wiggle room allowing for a good rest. For my first grand international travel experience, David made me feel at ease while providing an exceptional time. Receiving the cultural experience rather than just standard sightseeing was something the tour provided me that I would never have made it by myself.

The tour provided the correct information with regards as to what was going to happen and the expectations. It was the challenge undertaken at a certain time of life and a great personal achievement – both mentally and physically! I loved experiencing Chinese culture and truly hope this does not change as the villages develop. Charles could not have been any better – he was a fantastic tour guide who communicated fantastically with a group whose ages ranged from 28 to 75! The ability of the group varied immensely but Harvey kept it all together. His local knowledge was superb!

The trip was fantastic from start to finish. I had no complaints whatsoever. Excellent adventure! Our tour leader Anson was outstanding. Anson made us all feel welcome when he first met us, explained what would happen on the trip and answered all of our questions. Throughout the entire trip Anson went above and beyond what we expected of him!

The tour was very well organised from start to finish. This was an awe inspiring, breath taking trip. This was the first organised tour we had ever been on and we were a bit apprehensive but it exceeded our expectations. We would definitely use this company again. Our guide was excellent every step of the way she got to know us all in a short period of time was always on hand to answer any queries or to give information and advice and even accompanied us to the bank when we required extra funds.

I had a FANTASTIC tour around China which was mainly due to our lovely tour guide Leah who was fun, kind, professional and enthusiastic at all times. Leah surpassed all of my needs and wants when visiting the China. We saw fantastic sights in China and Leah was always extremely enthusiastic about each one despite having probably seen them 100 times before our tour! She also made it possible to do other things we wanted to do, for example, some of the group tried dog, snake and bamboo rat at a local restaurant in Guilin as they really wanted to and organised the whole thing for them! The whole tour was brilliant and after telling my mum and sister and showing them my pictures they are planning on coming back to China with me and hopefully we will be able to have her as our tour guide again!