When you book with an account, you will be able to track your payment status, track the confirmation and you can also rate the tour after you finished the tour.
Sign Up
476

Transfer from the airport in Rome to the Hotel.
Rest of the day at leisure and overnight.
Dinner is not included

Departure at 07.30 from the sightseeing office or pick up at the hotel from 6.45am to 7.00am for your trip from ROME to NAPLES by coach.
Leaving Rome in a southerly direction, we take the “Highway of the Sun” crossing the fertile Roman countryside through the area known as the ‘Castelli Romani’.
Approximately halfway along the highway, you will be able to see the Abbey of Montecassino, noted for its famous battle and complete destruction during the Second World War. Descending towards the port of Mergellina and following the coastal road, we arrive in the ancient fishing quarter of Santa Lucia and see the impressive Castel del’Ovo.
Upon leaving the city, we cross the fertile valley of Mount Vesuvius, passing the towns of Ercolano, Torre del Greco, Torre Annunziata, and finally arriving at Pompeii, where we stop first for lunch.
After that we will visit the excavations on foot with a local guide on an archaeological journey through the ancient city.
In approx. 2 hours you will see some of what has been discovered in more than 1,700 years since Pompeii was covered by ashes during the eruption of Vesuvius in the year 79 AD. Through the remains and ruins of this ancient city, we can picture the everyday life of the imperial Age and imagine the panic felt by the people in those last few minutes before the city was so disastrously buried.
At the end of the visit to Pompeii you’ll be transferred to SORRENTO along the Sorrentine Coast to your Hotel.
Dinner, overnight.
Meals: B L D

After breakfast pick – up from the Hotel and transfer by minibus to the Harbour of Piano di Sorrento. Jump on board of a semi – private boat (12 persons max.) and sail towards Capri. During the boat ride you’ll be able to enjoy wonderful views of this amazing Coast while passing through the Natural Reserve of Punta Campanella.
At the arrival, tour of the island stopping also (for the ones interested to swim and snorkel in the crystalline waters of the bay).
Highlights of the boat ride will be the Faraglioni Rocks, the famous Grottoes (Blue, White and Green) and the Lighthouse of Punta Carena. 4 hours of free time at your disposal to stroll along the little alleys of the town (audio guides with itineraries available on board).
In the early afternoon, return to Sorrento with Happy hour & Limoncello tasting. Dinner, overnight
Meals: B D

7.30am, pickup at your hotel or at the meeting point in Sorrento and departure for APULIA. Along the way you will visit THE Castellana Caves discovered in 1938.
The Grottos of Castellana are one of the most important attractions of Puglia and a natural heritage of inestimable value to Italy. The tour winds along a distance of 3 km, a unique guided tour of the caves to more than 60 meters deep in an amazing scenario made of stalactites, stalagmites, concretions, incredible shapes, fossils, canyons and caves with fantastic names; calcifications from conformations and amazing colors solicit the imagination of children and adults.
Time at leisure for lunch.
After the visit to the Caves, will continue our journey to Alberobello the town of the ”TRULLl” which is part of the Unesco Heritage list.
The Trulli are typical houses with a cone roof, used as homes and to store farmer
Here you’ll enjoy a wine tasting in the local wine cellar.
Proceed to Castellana Caves. Dinner and overnight at the hotel. Meals: B D

Buffet breakfast at the hotel and departure to Lecce famous for his baroque arts & street architecture developed between the end of the XVI century and the first half of the XVII century.
During the tour you will admire the rich and beautiful decoration of the St. Oronzo church, the basilica of Santa Croce and the Celestini palace and the Roman Amphitheatre
The tour will continue to Gallipoli, from the Greek Kallipolis meaning beautiful city, is a fishing village on the coast in southern ltaly’s Puglia region.
Gallipoli has a good old town built on a limestone island and linked to the main – land by a 16th century bridge.
Its harbors are used by fishing boats and there’s plenty of fresh seafood.
Free time for lunch and proceed to the village of Ostuni, also called “white town” because of its white walls and white painted houses.
Return to the hotel in Castellana Caves. Dinner and overnight at the hotel.
Meals: B D

Buffet breakfast at the hotel and departure to MATERA.
This town is internationally known for the ”SASSl” (stones), originated from a prehistoric (troglodyte) settlement, and are suspected to be the first settlements in Italy.
The Sassi are houses into the rock itself, which is characteristic of the Basilicata & Apulia regions. One of the peculiarities of this ancient city is that there is a great similarity with the ancient sites in and around Jerusalem.
This caught the eye of film directors and movie studios and the Sassi were the set of various films such as “The Gospel according to St. Matthew” (Pasolini 1964), “King David” (Bruce Beresford 1985), “The Passion of the Christ” (Gibson 2004) and the ”Nativity story” (Hardwicke 2006).
Matera is also part of the Unesco Heritage List.
Time for a snack in Matera and return via Pompeii where you will board a bus to Rome. Arrival in expected at about 09.00p.m.
Overnight in Rome
Meals: B

American buffet breakfast at the hotel, end of our services.
Meals: Breakfast 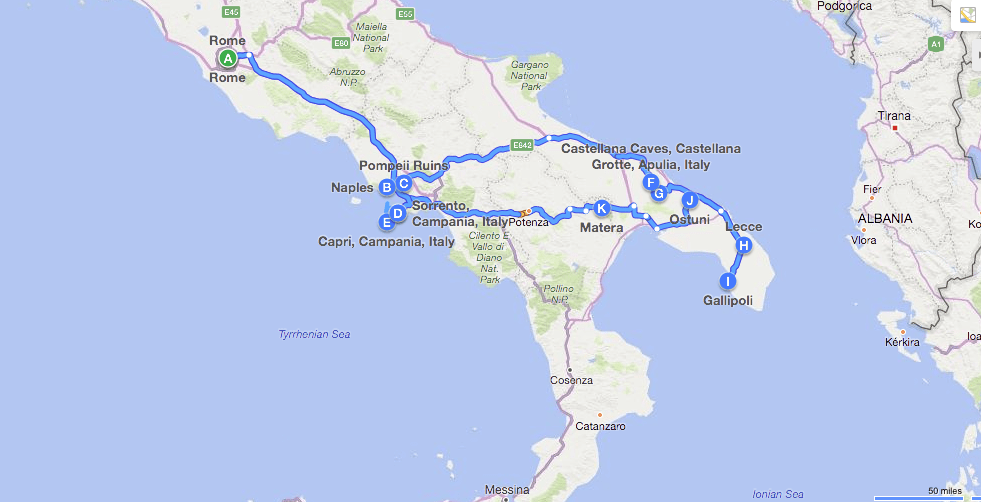