When you book with an account, you will be able to track your payment status, track the confirmation and you can also rate the tour after you finished the tour.
Sign Up
304

pickup at the hotel from 7:30am to 7:45 am and departure by motor coach to SIENA the beautiful medieval city renowned for the Palio horses race.
Discover along the streets, Palazzo Salimbeni, which is now used as the headquarters for the Banca Monte dei Paschi Di Siena, it was built in the 14th century.
\/isit the main square of the town, Piazza del Campo, a beautiful seashell shaped square, where the famous Palio horse race is held every year on July 2nd and August 16th.
Do not miss the chance to discover the impressive facade of the Cathedral dedicated to the Virgin Mary, covered with colourful local marbles, where several artists such as Michelangelo, Donatello, and Bernini have work.
Before you go, do not forget to taste the typical local dishes such as “Pici” – Home made pasta and the almond biscuits “ricciarelli”, symbols of the town.
Then proceed to Florence where you arrive around 14h00 and, after the check in at the Hotel, with the help of tour leader you have the possibility to visit one of the gorgeous Florence museum such as Uffizi Gallery, Accademia Gallery, Palazzo \/ecchio.
Welcome dinner in a local restaurant to taste a typical Tuscany menu Overnight in Florence
Meals: Dinner

After breakfast meet our local guide to visit the fascinating backstreets of mysterious Florence: from Piazza del Duomo, with its Baptistery and Santa Maria del Flore Cathedral to Ponte Vecchio, from Piazza della Signoria with its Palazzo Vecchio and Loggia dell’ Orcagna up to the central avenues paved with stone, where you’ll find authentic masterpieces whenever you direct your gaze.
An intense and concentrated tour in the very heart of Florence that will uncover you the many wonderful “must see” places of interest.
Free time for lunch and in the afternoon your tour leader will accompany you to discover the excellence of traditional local productions: visit one of the most famous jewellery where you can admire the collections of Florentine goldsmith master; walk around San Lorenzo lather market that will offer you high quality products, made with high grade leather and processed according to the most traditional methods giving life to the classic elegance of Florentine lathers bags, wallet shoes, racket that represent the essential of local artisan creative. Finally, let’s your nose twitches in delight, visiting an old perfume workshop which still produce fragrances using the medieval monks methods and recipes.
Overnight at the hotel.
Meals: Breakfast

American buffet breakfast at the hotel, check out and departure to VENICE by motor coach Along the way you will stop in \/ERONA. Explore the streets of his historical center, that was proclaimed UNESCO World Heritage site.
Be fascinated to see the gem of city the ancient Roman arena. Built in 30 AD, that is very well preserved and, in the century follow to host over 30,000 people for international music concerts included Verona Arena Festival, a summertime opera celebration that draws classical music lovers from all over the world. After taking some photos of the arena, head to the former home of famed opera singer, Maria Callas.
Then move on to Juliet’s House, the structure that inspired Shakespeare’s Romeo and Juliet. Wander back to Piazza Bra and have time for lunch.
Proceed to Venice, travel by boat till Saint Mark’s square and meet local guide who introduce you to the most important buildings such us the Doge‘s Palace, the Campanile, the Clock tower, the Library.
Here you’ll be told about the birth of the city and its glorious history.
Walk in the hidden Venice, to admire its back alleys, lovely canals, picturesque campos (squares) where take place everyday life and the structure of the city.
Reach Rialto bridge oyer the Grand Canal the heart of the city with its market area.
At the end of the visit have a lovely walk to your hotel for check in and enioy a typical dinner in a local restaurant.
Overnight in Venice
Meals: Breakfast, Dinner

American buffet Breakfast at the hotel and with your tour leader ride across the Venetian Lagoon to the colorful island of Murano to get an inside peek into the world – famous glass – blowing factories of this island.
Get a glassmaking demonstration from a master craftsman, and enjoy time to browse the factory showroom featuring finished works of art.
Return to St Mark square afternoon at leisure for shopping and private visits. Overnight in Venice
Meals: Breakfast

American buffet breakfast at the hotel, check out and departure for SlRMlONE well known as the Pearl of Lake Garda, “the gem of all the peninsulas”, as the poet Cattullus wrote.
The visit of the village commences with the suggestive Scala Castle of medieval times, built at the end of the 13th century by the Lords of \/erona.
Along narrow and close medieval streets one reaches the Parish Church of S. Marta which contains many images and paintings to be admired together with different altars and precious 18th century works of marble. Slightly uphill, one reaches the S. Salvatore Church, which dates to the 8th century.
At last, after admiring the park of the prestigious and luxurious 5 star Hotel Villa Le Cortine and the nearby Villa of Marta Callas, you arrive to the entrance to the Grotte di Catullo. This area is the most important archaeological area of the entire Lombardy region with imposing remains of what has once a luxurious Roman Villa on Lake Garda.
ln the afternoon, proceed to COMO LAKE where your tour leader walk you through all the historic highlights. As we stroll through the ancient streets in the heart of the Town,
surrounded by Roman walls, we can admire beautiful Romanesque and Baroque churches, Piazza Volta and Piazza Duomo, with its charming old Town Hall building, called Broletto, and its characteristic bell tower and the superb 600 year old Cathedral.
Departure to Milan where you can enjoy a panoramic tour to see the city highlights: Sforzesco Castle, medieval Piazza Mercanti, and Piazza della Scala, and one of the oldest shopping malls in the word.
Conclude your tour in the historical Piazza del Duomo.
ln the evening check in at the hotel, dinner and overnight in Milan.
Meals: Breakfast, Dinner

American buffet breakfast at the hotel, check out and departure to LA SPEZIA to embark for an unforgettable day dedicated to the discovery of one of the most amazing and enchanting landscape in the World: ”ClNQUE TERRE”.
”ClNQUE TERRE” is an area suspended between sea and land, hanging from sheer cliffs sur- rounded by hills and vineyards.
You will enter into a little piece of heaven. By touring the coast line by boat, you will have the possibility to admire this amazing landscape from the seaside.
(‘in the event of rough sea, the visit will be done partly by couch and partly by train.)
1. During the tour, the boat will reach Porto Venere and the most important villages where you can stop and visit them! Vou can take some pictures in PORTO VENERE, \/ERNAZZA and MONTEROSSO, walking into thenarrow streets and immerse yourself in a colorful postcard! Then you will reach la Spezia by train and form there you will take a private motor coach to reach Tuscany region with en route stop in LUCCA.
Walk on the cobblestone streets, explore squares and old Renaissance walls; and seethe birthplace of local composer Giacomo Puccini. Admire the medieval buildings along Via Fillungo, peek inside SanFrediano church and visit landmarks like the Cathedral of San Martino, Piazza Anfiteatro and Torre delle Ore and finally do not forget to taste Buccellato cake!
At the end of the walk transfer to hotel for check in.
Dinner and overnight in Lucca
Meals: Breakfast, Dinner

American buffet breakfast at the hotel, check out and departure to PlSA, where you can visit on your own the heart of the city.
Admire the Cathedral Square with Duomo di Pisa, Campo Santo, Pisa Baptistry, and, of course, the Leaning Tower of Pisa — UNESCO World Heritage Site.
Here you have free time for lunch and shopping and in the afternoon depart to cross VAL D’ORClA area, famous for its superb wine production and for the amazing landscape symbol of Tuscany region. Enjoy a stop in the most emblematic town of this area’ MONTEPULClANO.
Surrounded by the ancient city wall, Montepulciano is the symbol of the power and wealth of the noble families from the 14th to16th centuries.
Be enchanted by the beauty of Piazza Granule with the magnificent Duomo and Palazzo Tarugi; continue and see the Fortezza and the Church of Santa Maria dei Servi, one of the symbol of Renaissance art. Montepulciano is well known for the great production of red wine, it’s ”Nobile di Montepulciano” is one of the most appreciated ltalian wines in Italy and abroad. Montepulciano has a distinct peculiarity here you can find several historic cantinas right within the city walls, which have been dug out underneath the prestigious palazzos.
Have time to taste local wine and take some souvenirs. Proceed to Rome where you arrive around 7.3O p.m. End of services
Meals: Breakfast 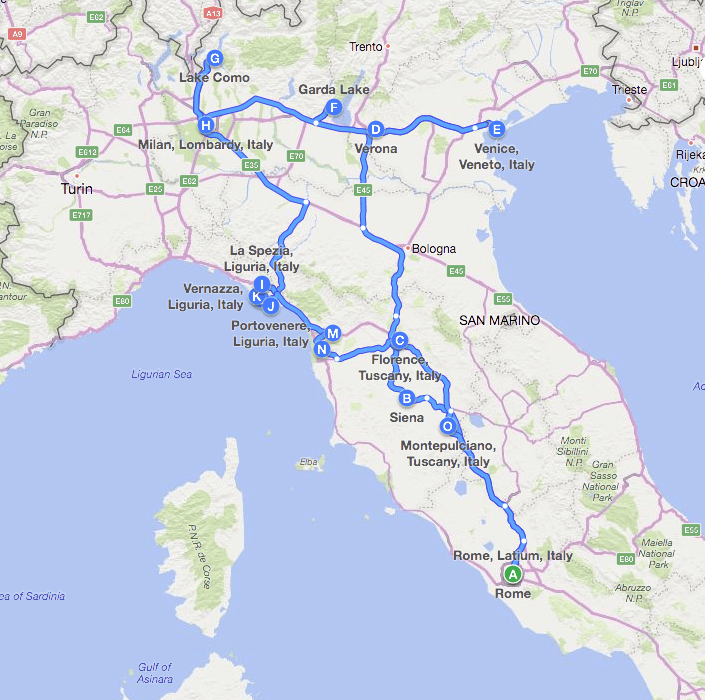