When you book with an account, you will be able to track your payment status, track the confirmation and you can also rate the tour after you finished the tour.
Sign Up
895

REGARDING TRIPS DESIGNATED AS CUSTOMIZED/PRIVATE TOURS:  Tour dates for these trips are for seasonal pricing purposes and can be altered to better fit your schedule after deposit has been processed and you have been redirected to specific tour provider for trip finalization.

Join us for a 12 day/11 night African safari and experience local culture and adventure;  experience the trip of a lifetime!

This tour is private and customizable; price per person is based on minimum of 6 people, so grab your friends and/or family and share an adventure that you will never forget!

Mara is a Maasai word for “spotted”. From the air, the visual effect of the Mara thickets looks like spots hence the name of Masai Mara Game Reserve. The Maasai Mara is one of its kind as this is the home of all the big five – rightly named big five – not because of their size but because of each of these animals were highly poached. Some for their horns believed to be aphrodisiac whilst others for their skin. Whatever the reason, the Maasai Mara has continued to be a safe haven for these animals. The Masai Mara boasts more than 450 species of birds which includes raptors. This park is home to astonishing number of animals, umbrella shaped trees, the beautiful sunsets (always at the same time every day of the year), the winding Mara River and the rugged Ololoolo Escarpment.

Sweetwater’s Game Reserve, also known as Ol Pejeta Ranch is located in an expansive 24,000 acres of a privately owned ranch, famous for its non-indigenous chimpanzees.

The Jane Goodall Institute established a Chimpanzee Sanctuary at the site. The sanctuary does not encourage breeding but it recognizes the importance of raising baby chimpanzees to adulthood. A walk around the Chimps Sanctuary will give you an opportunity to spot the orphaned chimps. It’s also the largest Black Rhino Sanctuary in East Africa. Apart from the chimps and the black rhinos, you have a chance to view the amazing variety of wildlife such as the zebras, lions, leopards, Thomson’s gazelle, Grant’s gazelle, Oryx, eland, baboons, elephants and various species of birds.

This is Kenya’s semi-arid region characterized by vast, open landscape, dried river beds, red volcanic soil, rock outcropping, river acacia trees and palm trees. Here you have the opportunity to see the five unique wildlife found only in the northern frontier i.e. Gerenuk, Grevy’s zebras, Oryx, Reticulated Giraffes and the Somali Ostrich in addition to the mammals. Samburu is a name of Masai origin, “Samburr” which means a traditional bag for carrying honey and meat. It lies 325 km (205 miles) from Nairobi in the hot and arid fringes of the vast northern region of Kenya. It’s located in what is known as the Northern Frontier District approximately 40miles north of the equator on the northern side of River Ewaso Nyiro which means “brown water”.’ Buffalo Springs is found on the southern side of the river. River Ewaso Nyiro has no outlet hence disappears into the vast Lorian Swamp downstream of Samburu. The reserve is within the land of the Samburu pastoralists who are related to the Maasai people in the south.

Upon arrival after clearance from immigration and customs you will be met by our safari director for meet and greet.
• Board your Safari vehicle and transfer to your hotel for check-In and refreshments. Early check in subject to room availability
• Lunch/Dinner will be on own arrangement from the hotel menus
Overnight: Park Inn by Radisson
Meal Plan: Bed & Breakfast

Wakeup call enjoy breakfast
• Check out and depart to Ol Pejeta Sanctuary arriving in good time for your mid-morning game drive.
• Ol Pejeta Sanctuary: Ol Pejeta Ranch is located in an expansive 24,000 acres of a privately owned ranch, famous for its non-indigenous chimpanzees. The sanctuary does not encourage breeding but it recognizes the importance of raising baby chimpanzees to adulthood. It’s also the largest Black Rhino Sanctuary in East Africa. Other species of wildlife include zebras, lions, leopards, Thomson’s gazelle, Grant’s gazelle, Oryx, eland, baboons, elephants and various species of birds.
• Depart for your afternoon game drive in the sanctuary.
Enjoy dinner and overnight

Ol Pejeta Conservancy /Samburu National Reserve.
• Wake up and enjoy breakfast
• Check out from your club and embark on your journey north of Kenya
• Arrive in your lodge for a sumptuous lunch.
• Spend the early afternoon at leisure/relaxing
• Embark on your first afternoon game drive in Samburu National Reserve which is famous for the Samburu special five.
• Return for dinner and overnight.

Enjoy full day game drive giving you a chance to see rare species of game which include Grevy’s zebra, long naked gerenuk, reticulated giraffe, Beisa Oryx, among other wild not forgetting many bird species.
• All meals served and overnight at your lodge.
• Optional visit to the Samburu Community (cost indicated separately)

Enjoy breakfast in the morning
• Refresh, check out and depart for Mt Kenya region arriving in good time for check in
• Upon arrival you will be given non-alcoholic cocktail with hot eucalyptus scented towels.
• Check in before lunch is served.
• The rest of the afternoon will be spent at leisure with dinner and overnight at your club.
Overnight: Serena Mountain Lodge
Meal Plan: FB

• Wakeup call enjoy breakfast
• After refreshing, check out and depart for Naivasha arriving in good time.
• Check in and enjoy your sumptuous lunch
• Optional boat ride with visit to Crescent Island (cost indicated separately)
• Depart to Hells Gate National Park and enjoy an afternoon swim at Ol Karia Natural Spa which is inside the park
• Return to your lodge for dinner and overnight.

Wakeup call and enjoy breakfast.
• Check out and depart to Masai Mara past the Great Rift Valley and Narok town arriving in good time for check in.
• Enjoy a sumptuous lunch and spend the early afternoon relaxing.
• Proceed for your late afternoon game drive in the reserve described as the 7th wonder of the world due to Annual Migration of the wildebeest.
• Enjoy sundowner cocktail served with cold canapes
• Return for dinner and overnight
Overnight: Mara Sarova Game Camp
Meal Plan: FB

Wake up call.
• Enjoy breakfast.
• Check out and drive to Nairobi
• Transfer to Carnivore Restaurant for your farewell dinner.
• Transfer to Jomo Kenyatta International Airport for your outbound flight.
****Safe Journey. End of Safari**** 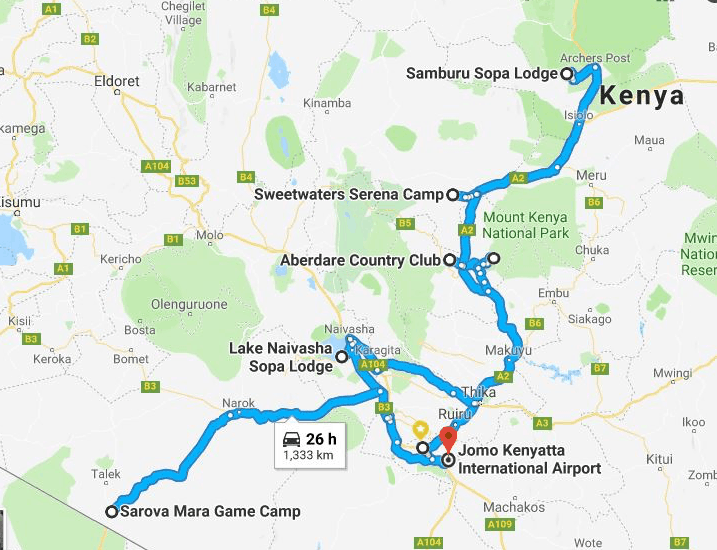