When you book with an account, you will be able to track your payment status, track the confirmation and you can also rate the tour after you finished the tour.
Sign Up
751

REGARDING TRIPS DESIGNATED AS CUSTOMIZED/PRIVATE TOURS:  Tour dates for these trips are for seasonal pricing purposes and can be altered to better fit your schedule after deposit has been processed and you have been redirected to specific tour provider for trip finalization.

Experience the grandeur and adventure of Africa’s Great Rift Valley!

This 5 Day/4 Night tour is private and customizable;  per person price is based on minimum of 6 people, so grab your friends and/or family and have an adventure you will never forget!

Maasai Mara!! The heart of safari.

Mara is a Maasai word for “spotted”. From the air, the visual effect of the Mara thickets looks like spots hence the name of Masai Mara Game Reserve. The Maasai Mara is one of its kind as this is the home of all the big five – rightly named big five – not because of their size but because of each of these animals were highly poached. Some for their horns believed to be aphrodisiac whilst others for their skin. Whatever the reason, the Maasai Mara has continued to be a safe haven for these animals. The Masai Mara boasts more than 450 species of birds which includes raptors. This park is home to astonishing number of animals, umbrella shaped trees, the beautiful sunsets (always at the same time every day of the year), the winding Mara River and the rugged Ololoolo Escarpment.

• Upon arrival after clearance from immigration and customs you will be met by our safari director for meet and greet.
• Board your Safari vehicle and transfer to the Great Rift Valley in Naivasha.
• Depending on the Estimated Time of Arrival, you’ll be served with lunch or dinner in your lodge once you check-in.
• Early afternoon at leisure relaxing
• Optional afternoon boat ride with visit to crescent island (At an extra cost)
• Return for dinner and overnight.

• Wake up call.
• Enjoy breakfast.
• Check out and depart to Masai Mara past the Great Rift Valley and Narok town arriving in good time for check in.
• Enjoy a sumptuous lunch and spend the early afternoon relaxing.
• Proceed for your late afternoon game drive in the reserve described as the 8th wonder of the world due to Annual Migration of the wildebeest AND home to the African famous the Big Five.
• Optional sundowner cocktail served with cold canapés (At an Extra Cost)
• Return for dinner and overnight

• Wake up call.
• Enjoy breakfast.
• Check out and drive to Nairobi with optional lunch at Narok Town enroute
• Arrive in Nairobi. You’ll be dropped off at Jomo Kenyatta International Airport to connect to your outbound flights 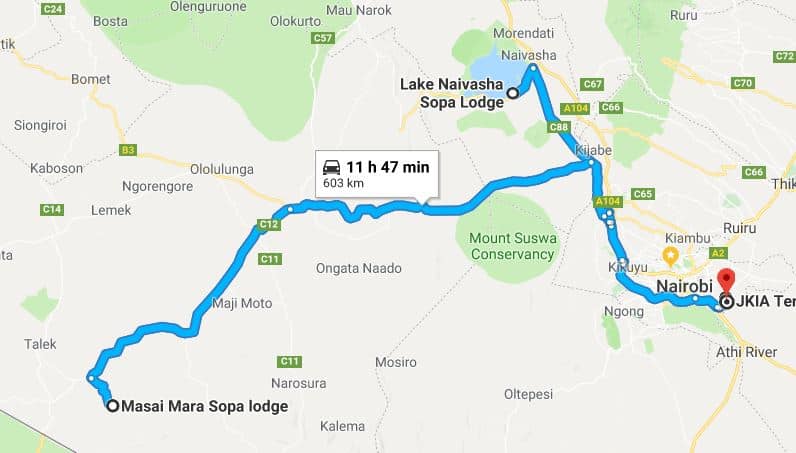